You can count on us to help provide the information you need to protect your business and serve your clients more effectively. 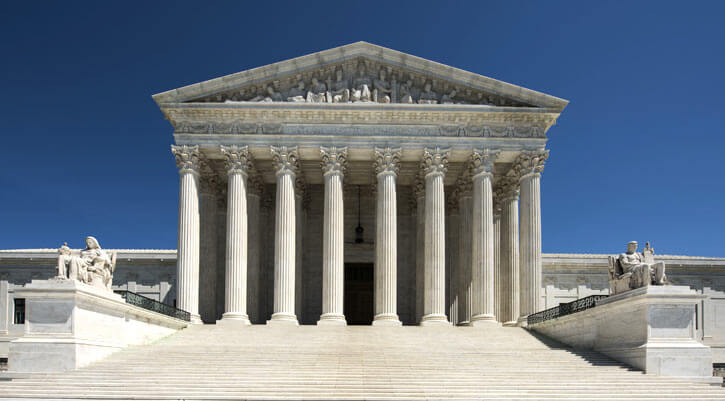 Are plan fiduciaries protected from excessive fee lawsuits just because they offer participants a menu of investment funds that includes some low-fee investment choices? Or are plan sponsors and other fiduciaries required to do more than that?

The answer to these questions may determine whether an excessive fee lawsuit is dismissed quickly and before an expensive, time-consuming trial. The U.S. Supreme Court recently provided a clear answer in the case of Hughes v. Northwestern University, ruling that fiduciaries do have additional responsibilities under ERISA.

ERISA shields fiduciaries from responsibility for investment losses when participants select their own investments, as they do in 401(k) and 403(b) plans. The scope of that protection was indirectly at issue in Northwestern.

Plaintiffs’ complaint in the case included allegations that Northwestern breached its fiduciary duty by offering funds with excessive fees, including a stock account option with excessive management fees and a history of underperformance. The Appeals Court dismissed the suit, finding it sufficient that the plan allowed participants to select their own investments from a menu that included funds with lower fees.

The Supreme Court overruled the Appeals Court, saying fiduciaries are responsible for more than that. Citing its prior decision in Tibble v. Edison, the Supreme Court decision by Justice Sotomayor reaffirmed that fiduciaries have an ongoing duty to monitor plan investments and must review every fund in the menu to determine whether it is or remains a prudent choice.

What the Supreme Court Didn’t Decide

The Northwestern case was sent back to the lower courts, but that doesn’t mean the plaintiffs will win. The Supreme Court simply sent it back for reconsideration under the standard in Tibble. Plaintiffs still must meet their burden of proof to prevail.

Plan sponsors and fiduciaries had hoped this decision would define what participants must show to avoid having their case dismissed quickly, but the narrow decision didn’t establish any special rules to apply in ERISA cases. However, Justice Sotomayor did point out that investments are to be evaluated in context, and as part of a process that takes into account “the range of reasonable judgments a fiduciary may make based on her experience and expertise”. In other words, there isn’t just one right way to invest.

What the Decision Means for Plan Fiduciaries

A few lower court decisions issued after Northwestern refused to dismiss the claims, which could mean that in the future fiduciaries might find it more difficult to have cases dismissed at an early stage and avoid trials. Just offering a broad selection of investment choices won’t protect fiduciaries from being sued. In fact, if a menu has a very large number of funds, it is likely that one or more funds in the mix could be cited as imprudent.

To uphold their responsibility to “do more” fiduciaries should:

The decision also includes guidance that can be cited by fiduciaries who have been sued. Some lower court decisions issued before Northwestern dismissed complaints that just made conclusory allegations such as a prudent fiduciary would always select index funds over actively managed funds. Or the fiduciary did not indicate why a selected benchmark with lower fees and/or better performance was appropriate. (See the decision in Kurtz v. Vail Corp.)

It should still be possible to make these arguments after Northwestern because the participants must still meet general pleading standards to avoid having a case dismissed. In addition, since funds are to be evaluated individually, it may be that participants do not have standing to challenge funds in which they have not invested. The lower federal courts are currently grappling with this issue but it was not addressed by the Supreme Court here.

Time will tell how the law develops, but it is clear that ERISA plan fiduciaries can no longer claim protection from lawsuits just because they offer a broad range of investments. Plan fiduciaries must make determinations that the funds available to participants are prudent and appropriate on an ongoing basis. Even if they do not succeed in having lawsuits against them dismissed quickly, plan fiduciaries who can demonstrate they followed a prudent process will have a good chance of prevailing later on in the proceedings.

Carol I. Buckmann, JD, is the co-founding partner of Cohen & Buckmann, P.C. She is one of the top-rated employee benefits and ERISA attorneys in the U.S., and deals with some of the foremost issues in ERISA, including pension plan compliance, fiduciary responsibilities, and investment fund formation.

The views expressed in this article are those of the author and do not necessarily represent the views of PenChecks Trust®, its subsidiaries or affiliates.

Let us know if you liked the post. That’s the only way we can improve.
Related Insights

Why You Need Cyber Security Insurance and How to Get It

In recent months, the topic of Cyber Security insurance has crept to the top of the charts for the Department of Labor’s (DOL) ERISA Advisory Council (EAC). Each year, the EAC picks topics it deems crucial to the administration of ERISA.

How to Fight Back Against Social Engineering Hackers

Have you or your business fallen victim to a social engineering scam? Are you concerned about having sensitive client data stolen from your computer network by a cyber hacker? If so, you’re not alone, as cyber security has become an ever-growing threat to individuals and companies around the globe.

SSRA and RSSA: The Next Step in GID (Getting It Done)?

I learned a long time ago that laws can be like sausage. They may look great but you don’t want to see them being made.1 That may also help explain how we get some of the unusual, sometimes pithy acronyms used for new legislation.

Who Knew Distribution Processing Could Be So Simple?

Learn how Amplify – PenChecks’ powerful cloud-based processing platform that automates and streamlines the retirement distributions workflow – has become the standard platform for all the company’s clients and how it keeps getting better.Learn more about...

Why Our Clients Believe in PenChecks

Over 29 Years of Industry Leadership

PenChecks Trust® President and CEO Spiro Preovolos talks about how PenChecks became a leader in the retirement plan distribution industry by doing what nobody else was doing.Learn more about PenChecks:

For nearly 30 years, PenChecks has leveraged its people and technology to support their retirement plan clients efficiently and effectively. Learn how PenChecks can be big enough to process billions of dollars in distributions each year but small enough to care. Learn...

Have an idea for a topic you don’t see here? Send us an email and we’ll look into it.

Subscribe to our newsletter to receive regular email updates on the latest happenings at PenChecks Trust® and in the retirement plan services industry.

Send this to a friend
Hi,
I saw this on the PenChecks Trust® website and thought you may be interested in this: https://penchecks.com/u-s-supreme-court-rules-on-fiduciary-responsibilities/